A Wee bit of Music Nostalgia ..Post it here 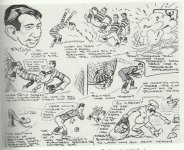 this is something i've come across on you tube recently, its a theme that started long ago with the ideology of bringing musicians from all over the globe together and aptly titled
'playing for change', It really is some of the most amazing versions of the greatest songs we know, played by unknowns, Once you watch one, you'll never stop listening....
they were so good they got appearances by some stars

I mind seeing big country ( who was in the skids originally) and wet wet wet at the old haugh in glasgow green when it was nothing but gravel pitches.
Its was a free concert and about 100k turned up mid to late 80s and my first experience of this size of gig and a 5 minute walk from my hoose.
Was great also climbed a tree to see Michael Jackson in the same place before the news broke that he was a a child abuser, ( allegedly) for those wacko fans his music is great his actions were not but bhoy could he put on a show. Nowadays these gigs are lost to hampden who undercut their neighbours stadiums to make sure they get it.
Hampden is a modern stadium but let's be honest it's not a patch on CP, murrayfield and dare I say ibrokes.
Look at wales national stadium and the cost of over 100 million hampden cost 50 million and cheap skates.
If the joint euro bid goes ahead in uk and Ireland hampden should not have all the games as we seen the embarrassment of empty stadium when scotland wasnt there that's an embarrassment 100% and we cannot allow that again.
I'd rather see a full tynecastle than an empty hampden
Last edited: Apr 12, 2022
R

I was looking for a video of The Fall and the song MrPharmacist. I always thought it was The Falls song.
I was amazed when I found this version from 1966 by a band called The Other Half.
Is this the first punk song?

What about this guy Mag7

Tony said:
What about this guy Mag7

Seen him live 3 times Tony ..me and the wife still miss him ..gone too young

Whit is going oan in this thread, is someone trying to get their Nat king Cole? A wee bit of woo-ing music

Ye cannie beat getting a bit of Nat

Another great from the great Nat King Cole and just a tad more relevant today.