the two cunts might just huv hud a dodgy bindaloo

I've had the same messages, 2 dead one in critical condition, the Boca Juniors Ultras tracked them down and had a word
I

Smelltheglove said:
I've had the same messages, 2 dead one in critical condition, the Boca Juniors Ultras tracked them down and had a word
Click to expand...

Ian65 said:
Deserve aw they got fuckin ghouls Bastards hope he’ll is as hot as they say
Click to expand...

The costliest picture they'll ever have taken
I

Smelltheglove said:
The costliest picture they'll ever have taken
Click to expand...

and thick fuckers too, posting it online, seems they were got at within a day

No excuse for that type of behaviour
A country in mourning, and they're taking selfies of the man in his coffin
Horrific
RIP Diego
I

DILLIGAF said:
No excuse for that type of behaviour
A country in mourning, and they're taking selfies of the man in his coffin
Horrific
RIP Diego
Click to expand...

Perhaps the greatest ever footballer and a politically-astute champion of the oppressed. So sad for humanity that he died so young. A man with a history of cocaine use going on to coach El Chapo's home town team is a man in the valley of the shadow of death.
A man of unprecedented talent and a fine intellect robbed of his future by drugs. No doubt steered along that path by the employees of those who feared his opinions.
Slán Diego; imeasc na laochra an domhain
Last edited: Nov 29, 2020
I

Ian65 said:
That was no man that there was in footballing terms GOD bastards
Click to expand...

Aye and yease can aw right books about him , there was the best player ever , don’t gies yer pele pish Brazil would win world cups without the great one , Argentina ,Napoli would huv won nowt and yes I know 1978 so don’t gies that pish the wee man was so good it was fuckin scary , long live Diego Armando Maradona even Jesus died

I just watched that documentary on him on Channel 4 (it will no doubt be on catch-up or E4 in the next week). What a wonderful footballer but what a seriously fucked up person. Rest In Peace Diego Armando Maradona.

Guys were totally wrong to take the selfies and deserved the sack and a right good kick in the baws, but to lose their lives over it, just wrong in my book.

God bless Maradona..easily the best the world has ever seen..nobody even comes close to him..thanks for the memories Diego.

Ian65 said:
Lot a sick cunts about .I see the ghouls who thought taking selfie’s with a dead man was a cracking idea ....two of them killed the other critical in hospitals as I said cracking idea
Click to expand...

Wasnt one of them a child?

I was in Napoli a few years back when Diego was awarded the freedom of the city, he was GOD there, he was in the hotel next to us and the crowds stood for days chanting his name. He occasionally came out onto his balcony to acknowledge them, it was amazing to witness.
For me he was the greatest, there are a few candidates but that guys boots were like magical wands. A lot of the greats played with great teams, Maradona made average Napoli & Argentina teams, winners. RIP Diego HH 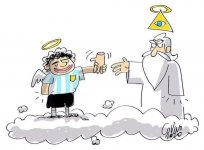