Bellshill bhoy said:
He TOTALLY lost interest last season, another player I’d happy drive to the airport, well passed his sell by date, good riddance...don’t let the door hit you on the on the way out......

He wanted to move sooner I feel the hype got to much for him.
Wonder if he will get his mojo back. 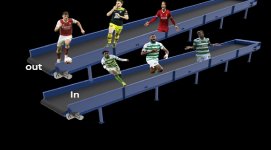 Its better to get money in now and get replacements in asap.

Felt Eddy wanted to go last year but we put "hands off" asking prices on our better players instead of actually looking to freshen up the squad and take decent money for want aways on 2yrs. I dont think he was the only one that felt as if he had been blocked a move, while we padded out the squad with high earners (for us) on loan and some fulltime duds.

Expecting a big fee after our season isnt going to happen unless he is one of the stars of the u21 euros.
Even then it will be an extra few million and risking him being injured.

Biggest change in his game was loosing the ball constantly which was mentioned above.
He was constantly dribbling up to players, not using his body at all to shield or even change direction. The result was the simplest of toe poke zero effort tackles were taking the ball off him.
He had zero competition upfront. Griff not fit, ajeti and paddy not up to task.
Played with no wingers nearly all season and fullbacks that had very little impact in the final 3rd for most of the season.

Get the money, bring in a replacement and we move on
A

Andy H said:
Haven't posted for ages because everything related to celtic is so depressing just now. This doesn't help

. What an absolute shambles - from invincible treble to worse than huns in such a short space of time. Lawell was poison to any success the club ever had and was paid millions for it. Next up - the "green caixhina" years

You never know Andy, the new guy might surprise us. HH

According to Saul said:
You never know Andy, the new guy might surprise us. HH
Click to expand...

. To be honest I don't think managers make much difference really with the odd exception like Alex ferguson or mourinho. Look at Neil lennon. Wins a treble one year and oversees an absolute shambles the next. So is he good one year, bad the next - or lucky one year and unlucky the next

. To be honest I don't think managers make much difference really with the odd exception like Alex ferguson or mourinho. Look at Neil lennon. Wins a treble one year and oversees an absolute shambles the next. So is he good one year, bad the next - or lucky one year and unlucky the next

Believe Andy a manager nowadays is more of a figurehead and a mouthpiece for the club.
His real value comes from the coaching set up he has behind him, for they will do the real work out on the training pitch.
A manager will get judged upon his team selections, game management and players he stands by for bringing into the club.
We still seem not interested in giving any potential ingredients for a manager to really be a success for which he can really be judged upon, which for me are criminal actions from this board