"They got the situation, they got me facin'
I can't live a normal life, I was raised supportin'
the stripes

The Long Wall saves the ball. No he don't, fool! Appeared
stunned by Scotland's own version of the Acropolis, and the
effect of Paisley Town Hall resulted in him failing to keep
out the scrambled opener. Thereafter, not a lot to do but
anything his way was handled, or footed, comfortably.

Has his Euro- nightmare affected confidence? Was so slack
first-half he was almost mistaken for a local wummin. Steadied
the ship in an uneventful second period, but not the focussed
no-nonsense force of will he once was. Mossad will be concerned.

Forced to take the ancient Viking test of manhood - step over
the Paisley cooncil boundary. He did more than that - rampaged
around like his ancestors, raped and pillaged them as he drove
the team on from opening minutes' disaster. If he's playing for
a move, he's racking up the rubles for us. Or lira. Or...Bitcoin?

From Brighton to Gloomton. He's used to the law of the gun and
fighting a range war so everyday life in these surroundings was
no daunting prospect. Takes a big character sometimes to lift a
side when the plan has gone out the window early, so tonight was
his time to prove his worth and we got it with a snapped header
and a grim determination to carve out a victory.

Half-baked crosses were the order of the day for our indecisive
baker. You'll never get a decent bun at Easter from him in this
form - he's so conservative at times I expect him to shout 'rugger',
don an Etonian top hat, and start buggering his opponents.

We need a left wing-back who'll provide an array of options and
not be afraid to sling in a speculative first-time cross now and
then to trip defences. This regressive ball-possession from
advanced flank positons won't do much. Dare a little, Greggs.

Despite a fascist-rally background from his Ibrox enclosure days,
it was interesting to see Hun pub regular - referee Beaton - take
the BLM cause to extremes and book Broony because a black man ran
into him...

Broon remained undaunted and unconquered in the middle. Laborious
at times with little option but to stare at a wall of zebras ahead
and hope the creatives around him could leverage openings. Yet it's
captains like him we need in games like these; he'll turn up the
grind and demand stoic effort. He'll enjoy embattled comeback wins
like this more than Saturday's 5-0 romp. The glorious perv.

You know you need a little extra help when the shotgun's gone off
on your foot; in Paisley, that's a daily hazard. And Celtic seem
to manage it here at least once a season.

So in ghost town, who you gonna call? Calmac, of course; our vice
captain in a city of vice. Prompted, prodded, guile-ed, and called
the shots right to the death. You better believe he was winning
this one; And he won this one alright, with his quality.

Showed Greggs how to cross a ball from the left to set up the
winner with a beauty of a dipping fizzer. He was getting right
into the rhythm of his game, when along came half-time to reset
and we didn't see the same timing for the remainder.

Although, he was in and about them, winning the penalty and
mentally sharp but just a little out of synch. Possibly un-nerved
by the local crucifixion policy.

Well, at least the big heid took the headlines tonight, Jamesy...
And the wee one stayed tucked and tamed, as was Jamesy by
St.Midden'sbeast at left-back, straight out of the Dr.Moreau
breeding program.

But let loose, you, me, the SPL, Europe, and glass collectors
everywhere know how 'surprising' the Prestwick Pele can be, and
that one moment of match-winning craft with a guided header was
the coming future flash that I alluded to on Saturday. Shame on
you for thinking it was anything else...

Tireless hustle but no joy as he was stifled by a defence stuck
together like the pages of one of his second-hand 70s 'art' mags.
Toiled until the hook. Must be said he got zero service, though.

Sometimes you're not the messiah, you're just a vilain garçon.
Disbelief as he failed to score his 98th penalty in 98 days.

When it's not your night, it's not your night and from a first
half quality save when it looked like a customary slotted
opener, Eddy was dogged by misfortune, heavy touches and the
break of the ball, culminating in that penalty save. In French,
termed as 'C'est la vie'. In Paisley, known as 'Witchcraft.'

Thrown in to Flock O' Seagulls some of those gangsta muthufuckas,
the Muthufucka careered around and managed not to get his
muthufuckin' ass sent off as he made sure we ran out top jungle
cats in their muthufuckin' hood.

The Paisley Bigfoot Patrol was kept waiting until Lennony made the
customary 'On you go and get your goal.' move. And The Yeti was
pretty close to doing so, only foiled by the in-form goalie before
being isolated alone up front as we re-jigged to hold on.

The energy injection was late but he'll go off like a firecracker
anytime you let him loose and no exception made here. Scythed down
by Manimal at left-back as he gave them pace to worry about.

4-4-2? Eh? What about the 3-5-2? What about domination by numbers
of the middle from the first whistle that won't allow them space
to break early, force a corner and score? What about the 3-5-2 the
SPL fears that guarantees our two strikers service and a minimum
amount of openings - enough to win handsomeely - as we saw on Saturday?
Why try a fix om what ain't broke? Why...

Ahh, don't ask... Lennony shifted the set-up and rotated the squad
to suit - and perhaps to outfox Jim goodwin, though he ended up outfoxing
us more. Still, relief all-round and no book dared be open on a repeat
formation come Saturday. Just, naw, Lennony...

A traditional early-season struggle in the home of the Paisley Pattern -
the name given to Serial Killer behavioural profiling in honour of the
birthplace of psychotic homicidal murder. A place now so dangerously
plague-ridden they even had the cardboard cut-outs of fans behind the
goal socially distanced.


After shipping that opening gift faster than Amazon, Celtic conducted
the Paisley Seige - a common news headline after hot nights in Feegie -
with near 80% possession but struggled to break down the possessed.
True to local folklore - and the discoveries of medical science's on-site
research - we could not kill what does not live.

We had no great tempo and it was no great spectacle - without a crowd
even less so; at one point the rare distraction of a plane flying overhead
could be heard, and the spears and arrows bouncing off its fuselage might
have taken the players' focus from the game. Broony launched a ball at it,
too, if I remember.

But we stuck in and hauled ourselves back from the brink of calamity to
get those precious three points. And that was all any of us really wanted.
Trust in these players to get the job done - they are winners. And they
want the TEN even more than you or me.

Cheered me up a bit after that dire showing. Cheers sandman HH

Your critique was the best thing about the game Sandman.

Staff member
Brilliant as always Sandman, especially after such a crap game. 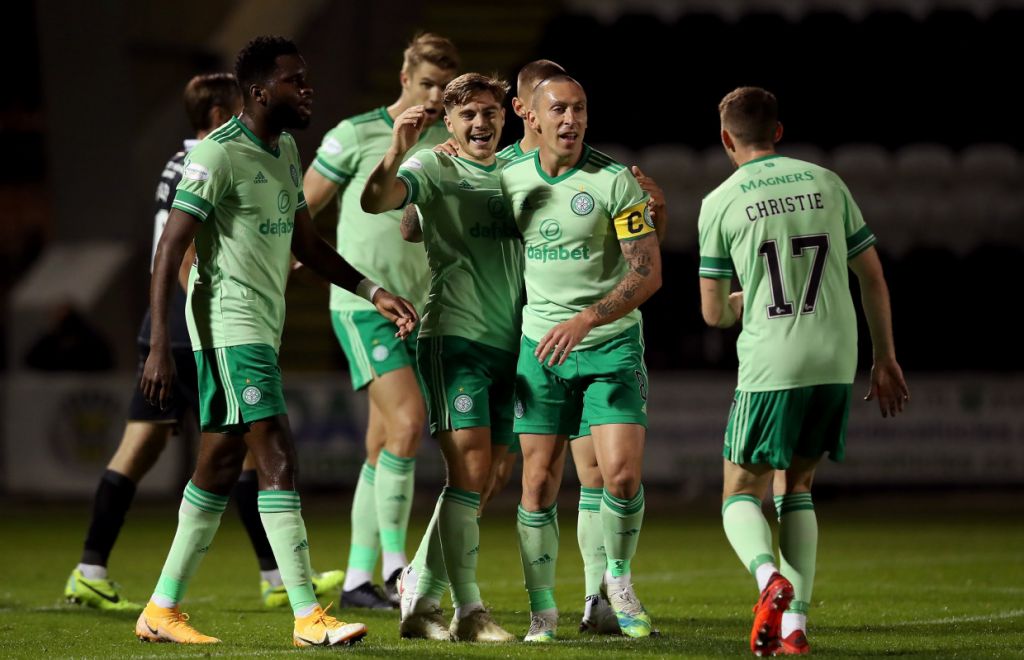 SANDMAN'S DEFINITIVE RATINGS: CELTIC @ GANGSTA'S PARADISE... "They got the situation, they got me facin' I can't live a normal life, I was raised supportin' the stripes B

Winning Captains said:
Brilliant as always Sandman, especially after such a crap game.

SANDMAN'S DEFINITIVE RATINGS: CELTIC @ GANGSTA'S PARADISE... "They got the situation, they got me facin' I can't live a normal life, I was raised supportin' the stripes B

Sandman said:
But we stuck in and hauled ourselves back from the brink of calamity to
get those precious three points. And that was all any of us really wanted.
Trust in these players to get the job done - they are winners. And they
want the TEN even more than you or me.
Click to expand...