Trump supporters are attacking the State Capital building...this moron got maced
If she was not white, she most likely would have been shot
She admits to storming the building and shouts it's a revolution
Obviously her evolution bypass has worked a treat
Absolute shambles
Trump and his family, should be charged, after he's out of office 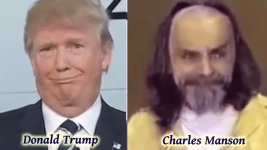 The rednecks are revolting......in both senses. Had the Capitol been stormed by the BLM campaign they would all be dead right now.

Trump took to twitter to call the mob...
"great patriots"

If karma exists that bastard must spend the rest of his hideous life in prison, and after that eternity being analy raped by a furious rhinoceros.

If karma exists that bastard must spend the rest of his hideous life in prison, and after that eternity being analy raped by a furious rhinoceros.
Click to expand...

Just a randy rhino would do.

I keep saying nationalism is a bad thing, nobody listens

A woman inside the building has died, sounds like a protester.

Think trump has fucked himself in his own arse here (no need for the rhino) he's actively supporting violence to overthrow democracy, most republicans must surely now turn their back on him? Fuck even twitter have blocked his account for 12 hours!
S

Hoopy427 said:
Think trump has fucked himself in his own arse here (no need for the rhino) he's actively supporting violence to overthrow democracy, most republicans must surely now turn their back on him? Fuck even twitter have blocked his account for 12 hours!
Click to expand...

Guys a Fukin FRUITCAKE LOONBIN.. Too Many Dbl Voddy & Bleach

DILLIGAF said:
Trump supporters are attacking the State Capital building...this moron got maced
If she was not white, she most likely would have been shot
She admits to storming the building and shouts it's a revolution
Obviously her evolution bypass has worked a treat
Absolute shambles
Trump and his family, should be charged, after he's out of office
View attachment 12820
https://twitter.com/i/web/status/1346937897060945920
Click to expand...

Just heard that they may be invoking the 25th amendment which allows for the removal of the president from office for breaching the rules of democracy.
It may be that Trump is removed in the next day or so for incitement and encouraging a coup on Capitol hill.
The leader of the house Nancy Pelosi has suggested such an event, then said no one is going home tonight (21:18 New York/ Washington time) until this is finished.
(Addressing the Senate before passing their acceptance for the incoming President Biden in a fortnight's time)

Just threw in the towel messages with my mate. We were going over twitter vids. What a mess.

BBC were insisting
"Why were they let in?"
One woman warned then climed through a window and shot in the neck

Over run?
Kind of stuck with me. There are a few twitter vids saying tear gas.
Its skinheads hitting a door with only smoke grenades. Few rows back the guys whizzez it away with a rotation of a scarf

The best defended place was inside past the main doors.

For me there isnt any actual footage of a storm of the door ive seen. Or police holiding it. Could be just too big a mob and they had to filter out.

Odd make up as trump has power still over certian reinforcements that he didnt call.
Other forces didnt react or take action when they should of.

If a desk can barricade a main hall. Find one for the main door?

Some reports saying they stood aside.
Conspiracy theories would say let them in to the main hall. The headinle screams terror. Its his folk doing it.
Again all the next doors have to do is barricade, yell constantly "guns are trained, open them we shoot".

Similar if you try that in an under threat gov building. Its a military place at that point. Enter . We shoot. Same reason the woman on the window was shot.

White protest tho. Cant imagine the horror and death count if the doors had been breached earlier this year...with different colour.

Any president asked , and now the act is being cited as internal terrorism.
It realistically should of by thier own rhetoric "shoot to kill".
They didnt.
Fine line though. The concealed carry % was probably high. Not probably. The amount of tactical gear + backpacks was evident.
The country that sold out of guns and amo mind when a x3 death rate and higher hospital admissions was announced. Eary on.
Could of been a blood bath

They took the lobby. PR disaster Globally. But its backed by a % of Americans on poll now?

There have been cases in states of non traveling people with similar mutations to ours.

Wait till it hits there.

There's lots of questions about the 'security' that should have been in place, after all the rhetoric from the orange bastard in the weeks after he lost the election
Whenever there's a dignitary coming to the State Capital it's massive barriers and a huge police presence, and National Guard, anti terrorist lockdown
None of this was in place, so the police on duty, were outnumbered, and to be honest, with all the gun toting 'toy soldiers' giving it large on you tube, and other social media outlets, they probably figured, fuck it, I have no desire to lose my life over this bullshit
Trump caused this shit show, by ramping up the intensity and rhetoric,and I doubt they will enact 25th Amendment, to get him out early, but who knows
We can only hope they do, and him, and all his family are brought before the courts, to face the music
Trump is on record for saying:
“I know you’re pain. I know you’re hurt,” Trump said in his statement. “We had an election that was stolen from us. It was a landslide election, and everyone knows it, especially the other side. But you have to go home now. We have to have peace. We have to have law and order. We have to respect our great people in law and order. We don’t want anybody hurt.

“It’s a very tough period of time. There’s never been a time like this where such a thing happened where they could take it away from all of us, from me, from you, from our country. This was a fraudulent election. But we can’t play into the hands of these people. We have to have peace. So go home. We love you. You’re very special. You’ve seen what happens. You see the way others are treated that are so bad and so evil. I know how you feel. But go home and go home in peace.”

"These are the things and events that happen when a sacred landslide election victory is so unceremoniously & viciously stripped away from great patriots who have been badly & unfairly treated for so long. Go home with love & in peace. Remember this day forever!"

The guy is a fucking wingnut and the world will be a nuch better & safer place with him removed from the White House
He might attempt to run again in 4 years,,,let's hope Karma, has a say in that
Last edited: Jan 7, 2021

He didnt seem overly keen to send troops abroad but continually fed the fires of 2nd amendment nuts. Im not against anyone holding that right but its the type he appeals to, or some, that l'd class as dangerous given influence. "Toy soldiers" as you put it.

One casualty was surprising. Morbid as that sounds

Big Bobo's bunnet said:
He didnt seem overly keen to send troops abroad but continually fed the fires of 2nd amendment nuts. Im not against anyone holding that right but its the type he appeals to, or some, that l'd class as dangerous given influence. "Toy soldiers" as you put it.

One casualty was surprising. Morbid as that sounds
Click to expand...

Reports surfacing of an explosive device found in the building after it was cleared of the domestic terrorists
Others said some of the rioters, had zip ties, could be they were prepared to take hostages
Remember last October, they were foiled in an attempt to kidnap Michigan Governor Gretchen Whitford
As you say, the real threat is within their borders, these guys should be hunted down by the FBI and thrown in prison for many years
The death of democracy in action

Trump decides tae hold a rally,for 1000,s of people,just down the road,from where people are going to confirm Joe Biden as president,coincidently on the same day,and no-one saw that shitshow comin? come on fur feck sake!

Never underestimate the mind of a madman, or his corrupt political friends
No integrity, no compassion, is one thing
Lunacy and meglomaniacal aspirations, are on another level
He's trying to bring a coup upon the USA, much like his idols in North Korea & Brazil, Nobody saw Boris Johnson in power a few years ago, or Trump, it's a fucking sideshow that is costing billions of cash and millions of lives
What a fucking last 4 years, on both sides of the Atlantic
People in the UK voting to fuck themselves under the Union flag
Nigel Farage trumpeting about Brexit
And Trump, boasting about Wall Street and the economy, while millions are losing everything, including their lives
Hopefully, this uprising of his mutant militia is put down quickly and people can get back to what's important
Bless us all, no matter which deity or belief, we adhere to

Trumps army of racists carrying out his choas whilst he pleads not to be exposed by his peers in the republican party. Americans need to insist this clown shoe is tossed out and made to face his fears which is exposed for been the idiot that he is.

Oooo, You cannot reach me now
Oooo, No matter how you try
Goodbye cruel world, it's over
Walk on by


Would you like to see Britannia
Rule again, my friend?
All you have to do is follow the worms
Would you like to send our colored cousins
Home again, my friend?
All you need to do is follow the worms
"Hammer, Hammer, Hammer, ..."
[Man with Megaphone:] "The worms will convene outside Brixton Bus Station. We'll be moving along at about 12 o'clock down Stockwell Road .... Abbot's Road .... twelve minutes to three we'll be moving along Lambeth Road towards Vauxhall Bridge. Now when we get to the other side of Vauxhall Bridge we're in Westminster Borough area. It's quite possible we may encounter some ... by the way we go...."
D