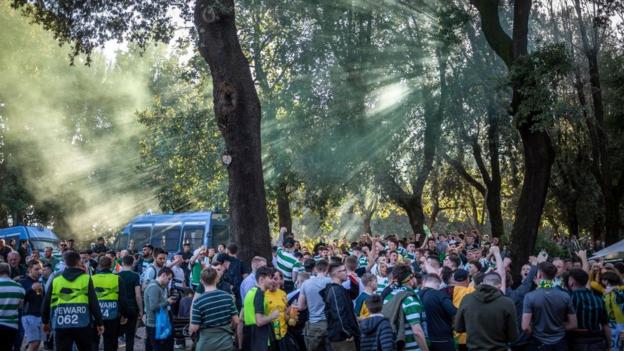 Several other supporters were attacked when a bus taking them from the stadium in Rome broke down and was ambushed.

Several other supporters were attacked when a bus taking them from the stadium in Rome broke down and was ambushed.

This report is fucking BBC at its most negative, the report talks about stabbings, ambush and then ends with
"
Tensions were high after warnings that Lazio fans wanted revenge for a controversial banner unfurled by Celtic fans at a match in Glasgow last month.
The banner showed the Italian dictator Benito Mussolini hanging upside down."

Hang your fucking head in shame McLaughling, not a mention of scum parading the streets in Glasgow displaying grotesque Nazi salutes, the whole incident in this report, Celtic had a banner. This is why no-one from Celtic should entertain these morons, morons who could not commentate on another game been played in Glasgow because they are allowing themselves to be dictated to, and do not have the balls to call the farce out for what it is, instead choosing to hide behind the sofa meanwhile attacking a club who have played the game in the spirit it was inteneded to be played in, Integrity and the BBC are miles apart as is their association to Inegrity with the sucking up to their EBT pundits and arse licking commentators.

We have Jackson of the record and mcglaughin of the bbc our club should just ban the paper and the broad caster from celtic park 3 of our fellow supporters where stabbed by violent nazis and these people blame us I'm proud of the stand taken by the green brigade it's a stand no one got stabbed by the green brigade but reading and listening to these people you would think they did .please ban these organisations from celtic park we don't need thier bile .
You must log in or register to reply here.
Share:
Facebook Twitter Reddit Pinterest Tumblr WhatsApp Email Link